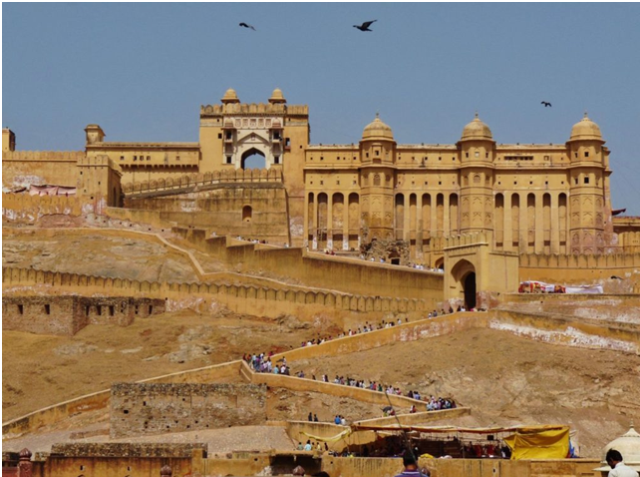 I love travelling and jumped at the idea of Rajasthan Travel to celebrate 2019 New Year’s with friends. We took a five-day trip to Rajasthan and explored beautiful Pushkar, Ajmer, and Jaipur. We reached Ajmer at night where the cold December winters welcomed us. Our winter jackets saved us from the chilly weather. Ajmer Rajasthan is famous for Ajmer Sharif Dargah and as soon as we reached the hotel, we freshened up and headed straight to the Ajmer Sharif Dargah.

As the city is very famously known for its Dargah Sharif, we did attend the evening Ziyarat (visit) and walked down through the lanes where we could taste the local delicacies from the sweet shop.

Pushkar is a vibrant town located about 15km away from Ajmer.

As we got into the town, we were greeted by a series of local stores selling authentic Rajasthani dresses, handicrafts, and different kinds of mouth fresheners to mouth-watering delicacies like Malpua, Kachori, Lassi, Moong dal Bhajji and much more.

Known as Pushakarni Lake, by the locals, Pushkar lake is considered to be one of the sacred lakes for Hindus where you would see thousands of devotees performing Puja for the well-being and good health of their loved ones, doing Shradh for the deceased or just taking a bath in the holy water to wash off their sins at the Taranighat.

I felt a lot calmer after performing the Puja.

Thousands of people, visit this temple every day to offer their blessing to Lord Brahma: the creator god of Hinduism.

Due to the heavy rush of devotees, we hardly got a few minutes of Darshan however, that was also worthwhile. Since photography is prohibited inside the temple we could not click pictures.

On the way to Ajmer, Maharana Pratap Smarak is unavoidable. With a backdrop of Ana Sagar Lake, people definitely stop here to click pictures.

Situated in the city of Ajmer, it is an artificial lake.

As you enter, you will find yourself surrounded by everyone, right from women selling fish food and tea to fishermen trying to catch fresh fish.

It was an amusing sight to see hundreds of fish swimming in the corner of the lake and suddenly disappearing as the fishermen throw the net to catch them. I felt a calmness there and that made my Rajasthan travel more worthwhile.

Our next stop was the Ajmer Jain Temple also known as Soniji Ki Nasiyan.

We were not allowed inside the Jain temple as only people doing the puja are allowed inside, but we visited the main chamber, also known as Swarna Nagari (city of gold).

A series of tall stairs took us to this beautiful chamber made out of 1000 kg gold which illustrates Ayodhya.

Our final stop in Ajmer was the Akbar Museum.

It’s been called a government museum after it was renovated by the Rajasthan government in 2017.

Those interested in historical sculptures would love this place as it dons some beautiful black idols of Goddess Kali, God Vishnu, weapons and lots more.

Standing on the opposite side of the road, I kept staring at the huge marvellous, structure with wide eyes like a kid staring at the candy in a candy store.

It took me a while as I walked inside the museum admiring every piece of art and trying to capture every picture at the right angle through my camera.

While coming out, I saw a dark pathway leading towards the Egyptian part of the museum, where a Mummy by the name of ‘Tutu’ has been kept.

One of the must, visit places in Jaipur is the City Palace. The palace is super crowded with people from all over the world who come to see it.

One can feel like royalty, by taking a ride in a Bagghi for a mere 250 rupees. The beautiful gates show the intricate craftsmanship of the artists.

Do you feel that people take advantage of you because you like helping others and can’t say “No”? But this leaves you with lots of stress, tiredness, irritability and no time for yourself.

If you want to stop this along with many other habits that hold you back, then read our ebook- Toxic people: Learn to identify & handle them & rediscover yourself. Click on the link below to buy the ebook.

Rajasthan’s travel would be incomplete without visiting the beautiful Rajasthan forts. Ashok- the auto driver, whom we had hired for the day, had many fascinating stories to share. He took us to the Hanuman mandir, which, according to him, is a must, if you visit Jaipur.

Before going to the Forts, we decided on a stopover at the Jal Mahal.

Local shoppers were pestering tourists to click pictures in traditional Rajasthani attire. Amidst all this, we could see the beautiful Jal Mahal, in the middle of, Man Sagar Lake.

While we were gorging on the hot CholePulke, Ashok, started telling us the story of Jal Mahal “No one stays here, as it is said to be haunted, at night, lights get switched on the palace with the help of Robots.” says Ashok.

Jaigarh Fort, also known as the Victory Fort, is built on the peak of the Aravalli hills. It is the house for the biggest cannon, in the world called JAIVANA.

As we started exploring the place, we got to know that this fort has never been won by anyone and was built to protect Amer Fort and is built about 400 m above the Amer Fort.

We did not get a lot of time to explore Nahargarh Fort as we were pressed for time but whatever we saw was worthwhile. You have to pay an additional Rs.500 to see the WAX MUSEUM and SHEESH MAHAL: the palace of mirrors

Amer Fort would definitely come on the top of must-visit Rajasthan forts. It is one most beautiful forts, I have ever seen.

You have to climb a stretch of 500 staircases, where you will see local shoppers selling things like Rajasthani turban, bangles, decorative items, and the list is endless if you want to avoid climbing, you can also hire a jeep, which will take you to the top.

We decided to go on foot. I was lucky enough to catch a glimpse of the fort, even at night when the beauty of the fort, just took my breath away.

We decided to spend this day leisurely and check out the local markets but had to cover a few places.

The biggest shopping mall I have ever seen: World Trade Park

With New Year’s around the corner, one of the biggest malls in India wore a festive look, with several lights and Christmas trees. We had an awesome south Indian breakfast, of Uttapam and Paniyaraam, at the restaurant: VAANAKAM (meaning ‘namaste’ in Tamil) before moving ahead to our next destination.

Before calling it a day and bidding adieu to Jaipur, we snapped some great photographs in front of Hawa Mahal and started wandering in Johari Bazaar and Bapu Bazaar.

One thing to remember in Bapu Bazaar is to be careful, as it is a known place for pickpockets. I left Jaipur with a heavy heart as I boarded the train back home remembering the moments that will stay as a memory forever.

Have you guys visited any of these places and how was your experience? Leave a comment and let me know!